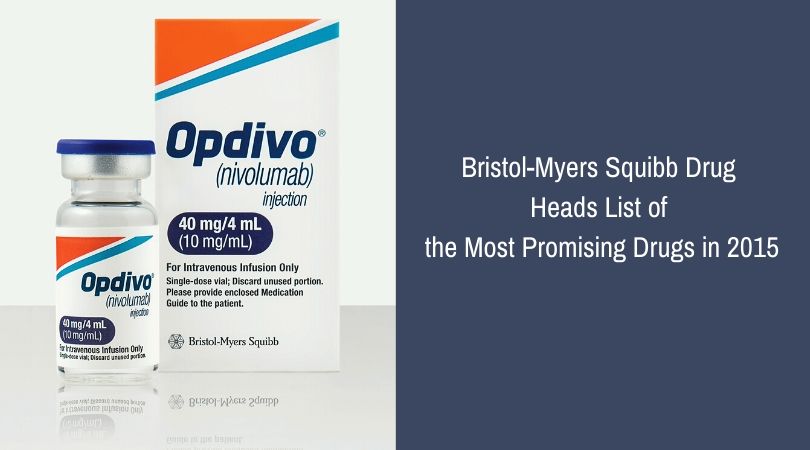 Thomson Reuters’ Intellectual Property and Science, a leading provider of analytic information for businesses and professionals, presented the annual Most Promising Medicines of 2015 annual report.

The analysis identified 11 potential highly profitable drugs that will lead the sales ratings and are potentially able to bring in profits in excess of one billion US dollars by 2019.

The rating of 11 potential highly profitable drugs is headed by the drug Opdivo (Nivolumab) / Opdivo (nivolumab), developed by Bristol-Myers Squibb to combat inoperable progressive melanoma. The drug was launched in Japan in September 2014, and in December 2014 it was already approved in the United States. Oddivo (Nivolumab) shows unprecedented results: during the study, one group of patients took Oddivo (Nivolumab), and the second received conventional chemotherapy, as a result, a positive reaction was observed in 32% of patients in the Oddivo group, versus 11% among those who did not take this drug. Analysts predict that by 2019, Opdivo will become the leader among highly profitable drugs, and its total sales volume will amount to more than $5.6 billion.

The pharmaceutical companies Sanofi and Novartis will launch 2 highly profitable drugs on the market right away. So Sanofi will introduce the medicine Praluent for hypercholesterolemia and insulin glargine with a new formula – Toujeo. The sales by 2019 will amount to 4.414 billion US dollars and 1.265 billion US dollars, respectively.

In turn, Novartis will release a cure for chronic heart failure LCZ-696 (sakubitril, valsartan), as well as a remedy for psoriasis and psoriatic arthritis Cosentix (secukinamab). According to the study, the company will receive more than 4.7 billion US dollars in profit from their sale by 2019.

In general, according to the study, 2015 will be marked by an increase in development in the field of immuno-oncology (Opdivo (Nivolumab), the launch of the first in its class drug for the treatment of heart failure (LCZ-696 (sacubitrile, valsartan), as well as the competition of pharmaceutical companies such as Regeneron Pharmaceuticals, Amgen and Astellas Pharma for creating an effective cholesterol lowering drug (Praluent (alirocumab) and Evolocumab). Companies like Merck & Co. and AbbVie will be the main competitors in the field of hepatitis treatment.

“In 2015, the number of potentially highly profitable drugs will increase significantly. This is an occasion to discuss models for identifying such drugs,” said Wendy Hamilton, global director of biomedical sciences at Thomson Reuters. “Financial flows in the pharmaceutical industry are constantly changing, and our report will help identify the most profitable areas of treatment.”

Bristol-Myers Squibb is a global biopharmaceutical company. Its mission is to discover, develop and market innovative drugs that help patients overcome serious illnesses. Their medicines help millions of people around the world fight serious illnesses such as cancer, cardiovascular, diabetes, hepatitis B, HIV / AIDS, mental disorders and rheumatoid arthritis.

The Bristol-Myers Squibb Foundation’s charitable programs are aimed at improving medical care and treatment outcomes, giving hope to people from the most vulnerable groups around the world.

Over the past ten years, they have developed and brought to market 14 new drugs for patients suffering from serious illnesses. Four of their 14 drugs have biological origin. A number of new biological compounds, as well as dozens of innovative chemical synthesis drugs, are at different stages of research and development. The portfolio of the developed Bristol-Myers Squibb products is rightfully considered one of the most promising in the industry.

In order to accelerate the discovery and development of important new treatment methods, they use a strategy of innovative alliances, partnerships and acquisitions, expanding and complementing our internal resources and capabilities.

As a leading biopharmaceutical company, Bristol-Myers Squibb has a commitment to helping patients overcome serious illnesses and a focus on discovering innovative drugs to combat these diseases. The creation and implementation of innovative ideas is the foundation of everything they do to change the lives of patients for the better.